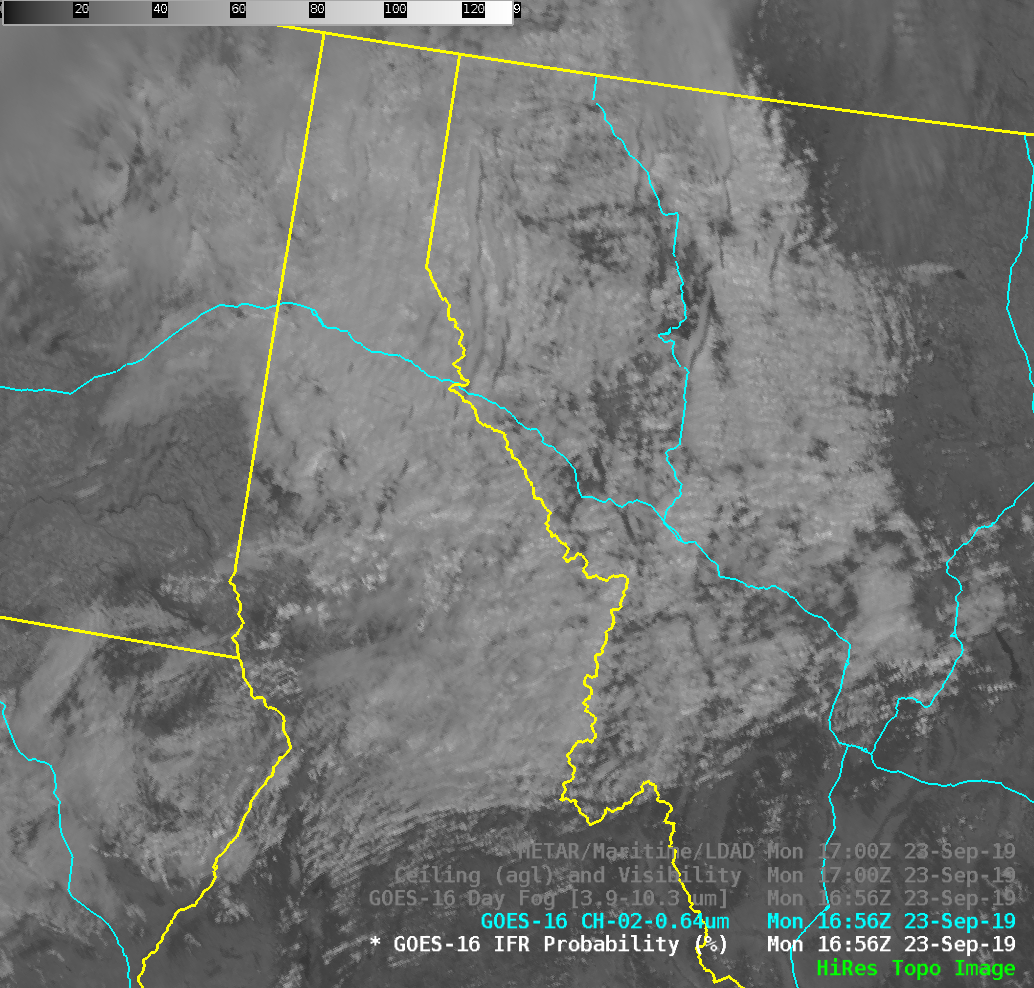 Consider the image shown above, visible imagery (0.64 µm) from the GOES-16 Advanced Baseline Imager.    Can you tell at a glance where the IFR Conditions exist?  If you are familiar with northern Rockies topography, and know that the prevailing surface winds in this area were southwesterly, perhaps you can make a good intuitive guess:  low ceilings and reduced visibilities are likely on the upwind side of the topography. 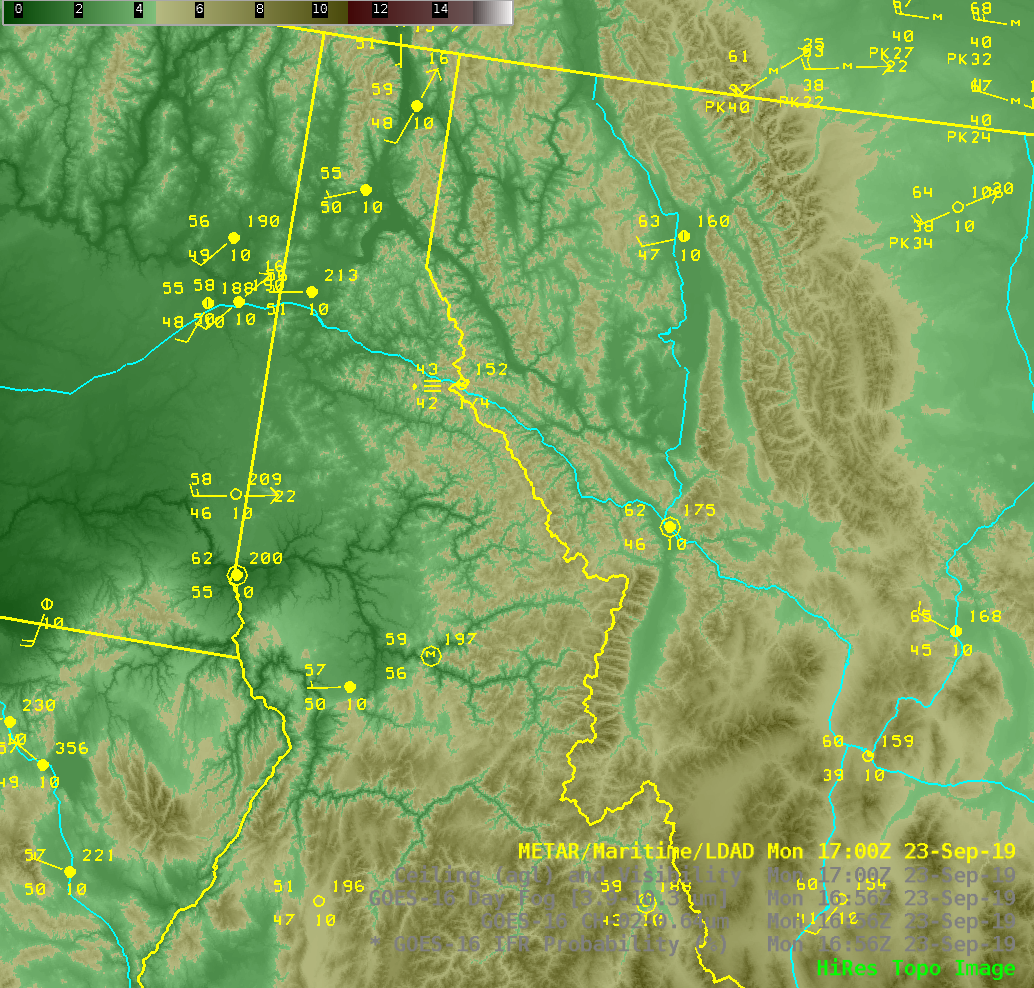 GOES-R IFR Probability fields are computed from visible and infrared imagery as well as from Rapid Refresh model estimates of low-level saturation. IFR Probability fields, below, correctly show increased likelihood of IFR conditions over the mountains, and mostly on the windward side of the topography. Mullan Pass, north of the center of the image, at ~6000 feet above sea level, is observing IFR conditions. 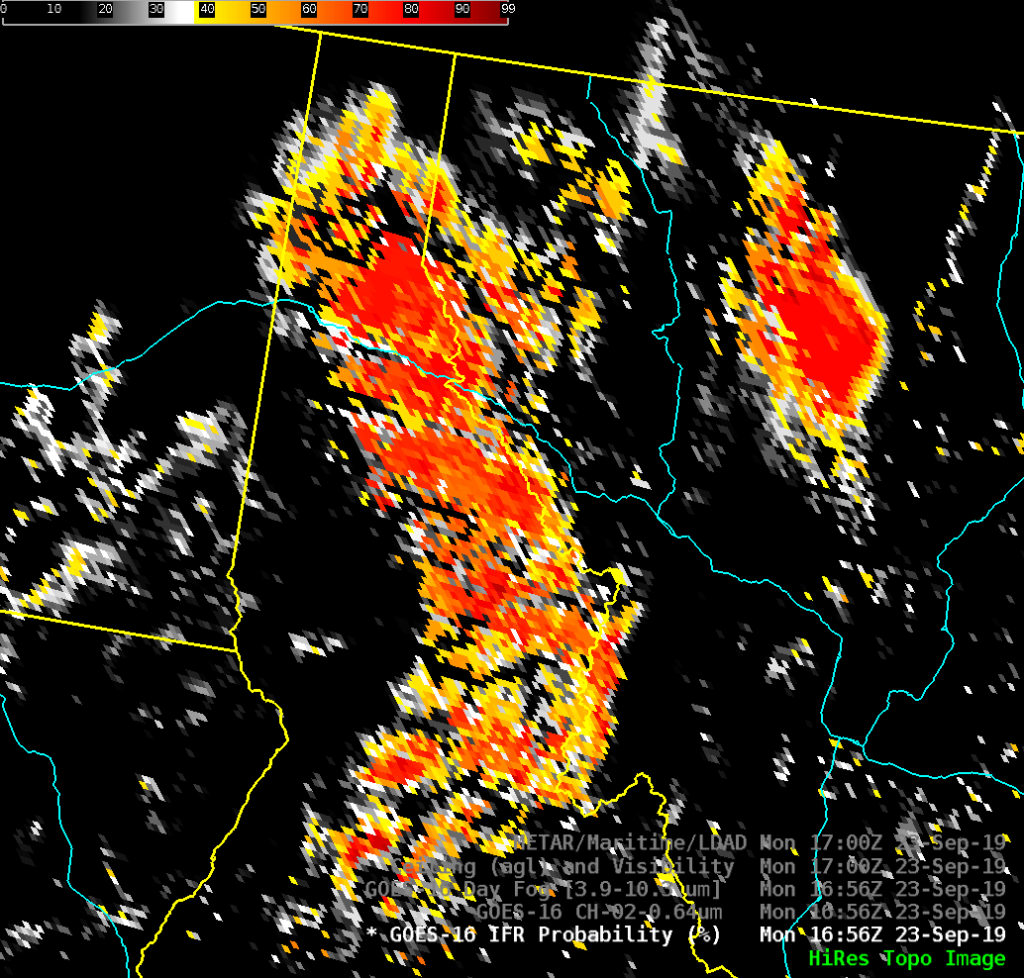 An added benefit of IFR Probability fields: It can be used day or night. GOES-R IFR Probabilities computed from GOES-West at 0930 UTC on 28 May, and Color-enhanced terrain (Click image to enlarge)

When IFR Probabilities are enhanced over high terrain, how confident can you be that IFR conditions are occurring? Surface observations are rare on mountain tops. It’s possible that clouds occurring are at one level as the terrain rises up into the clouds, and ceilings at adjacent stations can give an indication of the cloud base (in the present case, ceilings are about 9000 feet above sea level at Seattle, for example).

Suomi/NPP Day/Night band imagery can verify that clouds exist in the region where IFR Probabilities are elevated. The toggle below, of Day/Night band and Brightness Temperature Differences, shows compelling evidence (even in low light conditions) of clouds along the spine of the mountains in central Washington and Oregon.

High-resolution MODIS data are also used to produce IFR Probabilities, and they can be used to deduce the presence of low ceilings/reduced visibilities as well. The toggle below, from 1027 UTC, shows the brightness temperature difference field (11.0 – 3.9) from MODIS and the IFR Probability field. It is likely in this case that high clouds were shrouding the higher peaks of the Cascade Mountains. A strong low pressure system — the first strong system of the Fall Season — has made landfall along the Pacific Northwest Coast, and it provides an opportunity to see how GOES-R IFR Probabilities perform with extratropical systems.

Several aspects of the IFR Probability Fields — which are far more coherent than the Brightness Temperature Difference fields — require explanation. There is an increase in the IFR Probability off the coast of Oregon in the 4th image in the loop. This jump — from IFR Probabilities near 55% (orange) to Probabilities near 68% (darker red-orange) — is likely caused by a changed in the Rapid Refresh model output that is suggesting a greater likelihood of low-level saturation. Note that this region in the very next image displays the characteristic signature of the boundary between day-time predictors being used and night-time predictors being used (IFR Probabilities drop from orange yellow — 39%). In the early part of the animation, the IFR Probability field off the Oregon Coast maintains the flat (un-pixelated) look that is characteristic of a region where only Rapid Refresh model output is being used in the computation of IFR Probabilities because high cloud are present. GOES-R Cloud Thickness (of the highest water-phase cloud, not shown) would not be computed in this region, then, for two reasons: ice and mixed-phase clouds are present and it is during twilight conditions.

IFR and near-IFR Conditions are observed along the coast at Newport and North Bend before the frontal passage. IFR Probabilities are high along the coastal range, somewhat reduced in the Willamette Valley, high again in the Cascades, and lower again downstream of the Cascades. Note how the higher IFR Probabilities do take into account the presence of terrain; brightness temperature difference fields use only satellite data. Thus, after the frontal passage, when near-surface winds are west and south-west (that is, upslope), the IFR Probabilities remain high on the windward side of mountain slopes. (They are typically high, for example, at Sexton Summit — over KSXT — where IFR conditions are present until about 1100 UTC)

Suomi-NPP Day/Night band data can sometimes be used to discern regions of cloudiness. However, the Moon Phase is now a waning crescent that has not quite risen at the times shown in the animation above.