GOES-R IFR Probability fields are challenged most days by the diurnal penetration of coastal fog and stratus that occurs overnight along the California Coast. In the animation above, IFR Probabilities increase in regions along the coast, and also in valleys (such as the Salinas Valley) where fog moves inland. Note above how Monterey, Watsonville and Paso Robles all show IFR (or near-IFR) conditions as the IFR Probabilities increase. The same is true farther north at Santa Rosa and at Marin County Airport, and farther south at Avalon, Ontario, Point Mugu and LA International. IFR Probability fields routinely do capture these common fog events.

The Brightness Temperature Difference Field (10.7 µm – 3.9 µm), below, captures the motion of these low clouds as well. However, numerous ‘false positive’ signals occur over the central Valley of California (likely due to differences in soil emmissivities). The GOES-R IFR Probability field can screen these regions out because the Rapid Refresh data in the region does not show saturation in the lowest kilometer. Note also how the Brightness Temperature Difference field gives little information about low clouds where high clouds are present (over the Pacific Ocean in the images below). IFR Probability fields, however, do maintain a strong signal there because data from the Rapid Refresh strongly suggests the presence of low clouds/fog.

Suomi NPP makes an overflight over the West Coast each day around 1000 UTC, and the toggle of the Day Night Band and the Brightness Temperature Difference field (11.45 µm – 3.74 µm) is shown below. The moon at this time was below the horizon, so illumination of any fog is scant; the brightness temperature difference field does highlight regions of water-based clouds (that is, stratus); however, it does not contain information about the cloud base. In other words, it’s difficult to use the brightness temperature difference product alone to predict surface conditions.

GOES-14 is in SRSO-R mode, and its view today includes the west coast. The animation below shows the erosion of the fog after sunrise at 1-minute intervals. (Click here for mp4, or view it on YouTube). (Click here for an animation centered on San Francisco). GOES-R IFR Probability fields, 2100 UTC on 26 May 2015, along with surface observations of ceilings and visibility (Click to enlarge)

Sea or lake surface temperatures are part of the algorithm used to create IFR Probability fields. The cold Great Lakes in late May are a prime location for advection fog, and IFR Probability fields will blanket the Great Lakes with high values under southerly, moist flow. It is not uncommon to see all of the Lakes bright orange/red. Note in the image above how Manitowoc WI and Charlevoix MI both have IFR Conditions. In addition, Dense Fog advisories were issued north of Milwaukee to the tip of Door County. Easterly winds south of a High over the Canadian Maritimes ushered in cool, moist air over the Northeastern United States early on Monday. IFR Probabilities, above, show the progress of the low ceilings and reduced visibilities that accompanied the change in air mass. The low clouds eventually penetrated to the Delaware River, as shown in the GOES-14 SRSO-R animation here (from this blog post).

In the animation above, observations of ceilings and visibilities over southern New England approach IFR conditions quickly as the IFR Probability ‘front’ passes through.

Dense Fog Advisories were issued for the northwestern part of the Florida Panhandle overnight (Link).  How did various fog-alert satellite products perform for this case?

The brightness temperature difference product, below, that works because clouds comprising water droplets have different emissivity properties at 3.9 µm and 10.7 µm, did not provide much guidance for this event. This is because multiple cloud layers prevented the satellite from seeing down to the developing stratus/fog deck near the surface. The cloud deck persisted over Alabama, but eroded over northwest Florida by 0700 UTC. (Click here for an animation of GOES-Sounder Cloud Heights). In addition, fog persists through sunrise, and the rising sun is emitting 3.9 µm radiation; that makes interpretation of the brightness temperature difference field problematic.

The GOES-R IFR Probability field, below, provided better information about the developing cloud field. Probabilities increase as the fog develops, and the spatial coverage of the enhanced IFR Probabilities better matches the regions where Dense Fog Advisories were issued. In addition, the strong signal persists through sunrise.

GOES-R IFR Probability Fields computed from Rapid Refresh and GOES-13 Data, ~hourly from 0400 through 1215 UTC, and surface observations of ceilings and visibilities (Click to enlarge) 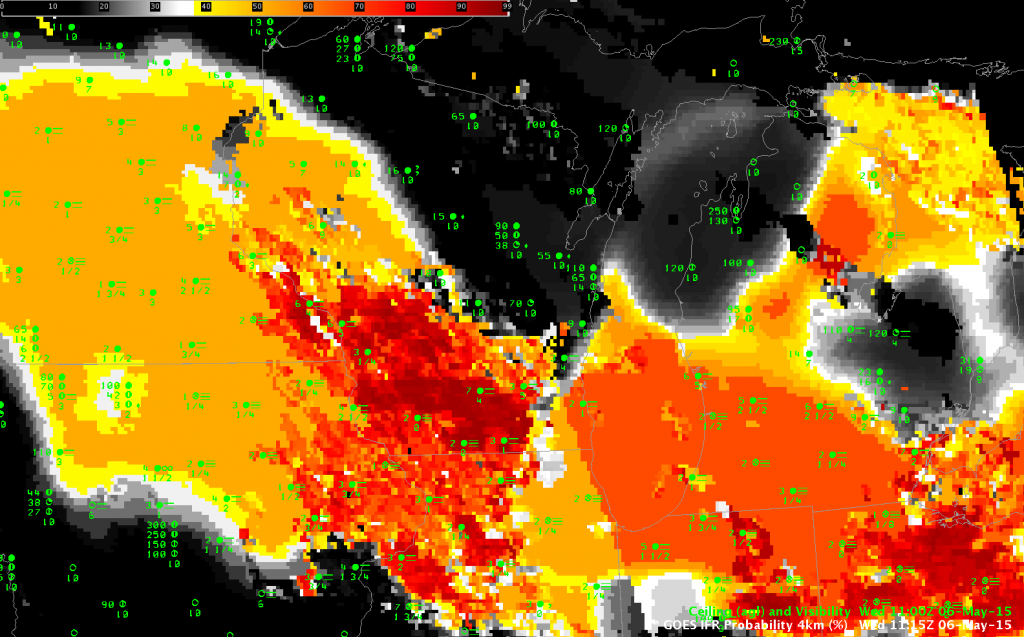 Dense Fog developed over the Hastings, Nebraska WFO overnight, leading to the issuance of Dense Fog Advisories. The GOES-R IFR Probabilities, above, show a steady increase in probabilities over the night as the fog develops. The relatively flat nature of the IFR Probability field is characteristic of GOES-R IFR Probabilities that do not include information from satellite (that is, only model fields are being used here to educe IFR probabilities). IFR Probability fields are a fused product, typically blending information from model fields and from satellite data. However, this was a case of fog developing under an extensive cirrus shield so that satellite data were not used as a predictors. The 10.7µm – 3.9µm Brightness Temperature Difference field, shown below, gives no information about surface conditions. That the IFR Probability fields neatly overlap the region of developing IFR conditions is testimony to the accuracy of the model field in simulating the lower part of the troposphere.

When only model data are used, as above, features in the field that are parallel to surface topography contours can become evident in the GOES-R IFR Probability fields. This is related to interpolation of the lowest 1000 feet of model relative humidity fields (moisture information that is used as a predictor in the computation of the IFR Probability) in regions of sloping topography. 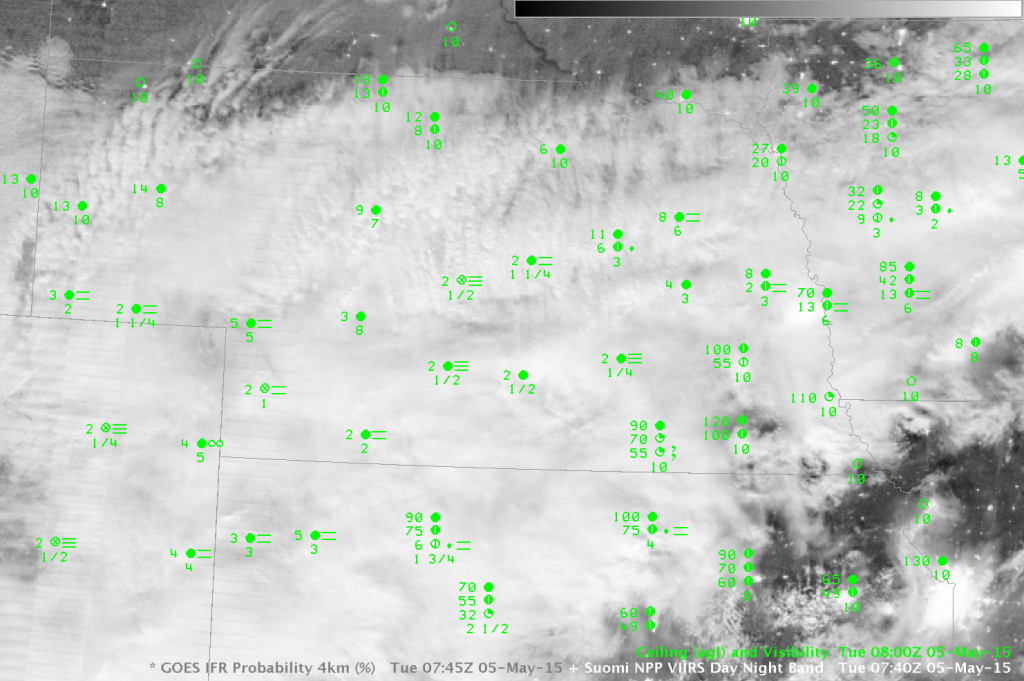